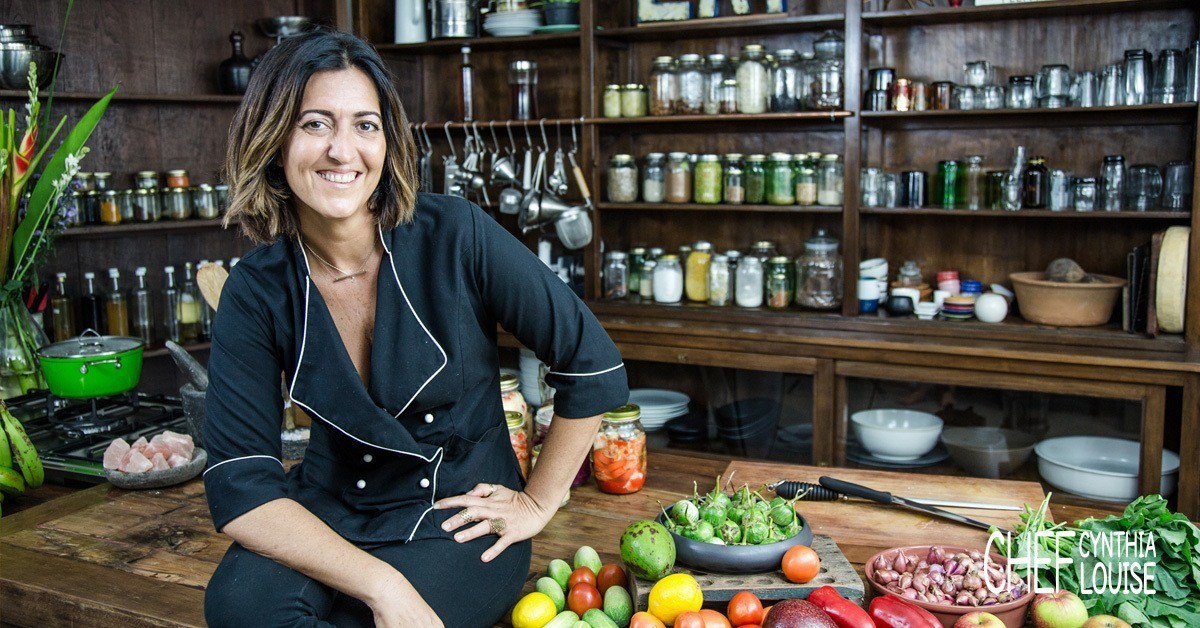 Food is About Storytelling and Community, An Honest Dialogue with Chef Cynthia Louise

PositiveVibes Magazine was lucky enough to be able to sit down, virtually, and talk to Chef Cynthia Louise. Chef Cynthia is a plant-based specialist who has starred in multiple cooking shows, released seven recipe books, and has released her own cookbook called Plant-Based Love Stories. She will also soon be releasing a second cookbook Celebrate Your Sweet Tooth Naturally: Plant Based Dessert Recipes.

PVM: Why don’t you give us an overview of who you are?

I’m a woman. A business woman. And a Mom. And also someone that loves gardening and growing food or being around any kind of farming situation… My joyful daily life is surrounded by incredible people and food of all different cultures and behaviors. Living in Indonesia, there’s so many different cultures and food cultures and styles and I just have that privilege and that honesty to be able to be a part of that as a chef. And my food is created through stories and fun and laughter and things that I’ve experienced along the way as a chef. And then [I’ve] thrown in plant-based ingredients purely because why wouldn’t you!

PVM: How did you get started? When did you first know that you wanted to do this with your life?

When I was 35 actually. I’ve always been this person that has loved cooking from scratch. I’ve always been the friend that you’ve got that has dinner ready. I started quite late. Before that I grew up in Papua New Guinea. It’s a developing country where food is a right not a privilege and had that founding relationship with creating food from scratch. From making coconut milk to making big holes in the ground to cook food in. So I started in one of Australia’s leading health retreats, not that I knew what that was but what it had was a garden and wonderful views in the mountains. It reminded me of New Guinea, that style of being. I had no idea what a health retreat meant. I had no idea what it was like to even diet. My career was founded in a health retreat then I journeyed through to where I am today.

PVM: What is your suggestion on people who do those crash and fad diets?

This is what I teach. Understand the 78 organs in the body and how they operate. If you can sink into that as a thriving heart beat on its own then you really start to feel how precious they are. That takes a little bit of time. And then we get to facilitate falling in love with ourselves. What you put in, whether it’s food or energy, it’s how you participate in that moment. So my journey with people that get swamped up in these diets and this way of being is let’s just stand back and look at that but let’s now look internally and have a deeper understanding of how the body actually operates.

PVM: You’ve said that food for you is storytelling and community. Could you please talk more on that and what you mean by it?

Growing up in New Guinea, food naturally brought people together. It naturally created a conversation. It is the most asked question on the planet: what’s for dinner? It is a naturally occurring community without intention. Intentional communities in my experience don’t work. But a community that has an un-intention of being together. I love having dinner parties but I love people to come early. So they are helping me cook or they are sitting there discussing the joyful moments of their day along with the heartache and pain and suffering of their day as well. All that becomes this beautiful unintentional community and then food just brings this “wow.” It could be something as easy as macaroni and cheese or french fries. It doesn’t matter what it is. It’s the vibrational match that we have with each other that brings this sense of wonder and this sense of “oh my gosh.” That to me is why I cook.

PVM: What is it like living in Indonesia? What is your favorite part about living there?

Oh my God, the people. The people for sure. It is a Hindu culture and Hinduism is incredibly giving. The people around this culture naturally give offerings three times a day. We stop what we are doing no matter what it is and we pray. The pleasantness of being a part of that and how family is the most important thing in Indonesia, especially in Bali, is that if I marry a guy I go and live with his entire family. It is based on looking after that family and community. It’s really beautiful to be around it. It really makes you see how other people are brought up in other countries where you’re born, then you go to school, then you go to college, and then you go to University, and then you get married, and then you have a kid and then you visit your family once a year at Christmas. It’s like the complete opposite to that. Every single day is family and it just really brings you to your knees. And it really, really gets you to be in touch with your family that are so far away constantly. So it’s a really great reminder.

PVM: Can you speak more on what Hinduism is for our audience that may not know about Hinduism?

This is a very old Hinduism. There are many, many Gods. We’ll have a day of celebrating metal because back in the days of the Gods metal was their sword. This metal could be from your car today. So they would give offerings all over their car. This offering is through making a little tiny basket out of banana, then putting some flowers in it and then lighting some incense and then praying to metal. Now we would never do that. We would never pray to our computers. We miss the mundane and they don’t. This is the same with many other Gods during the year. It’s all about the many, many Gods and what they represent. Hinduism is about praying in a way of believing that it is such a pleasantry to live, and not praying for actual things or wants. Also in Bali, Hinduism is really quite incredible, especially its ceremonies. The people here in Bali dress the same when they are doing a ceremony.

They have this thing called the kebaya and it’s beautiful and they just carry big offerings on their heads full of apples and oranges and flowers. They walk down the street holding this offering and then they all sit and they pray to that particular God. Hinduism also celebrates the new moon, the old moon, the whole moon. They celebrate different sizes of the moon and it is very, very interesting. The whole country basically stops and celebrates that moon. It’s very enchanting to be honest and I know very little about it. There’s also a lot of spaces where water is celebrated. Any kind of waterfall area around Bali they’ll put it into a temple and you go there and you pray and you drink that water because that water is coming from thousands and thousands of kilometers away that has traveled through time and space. And they’ll put the water on their heads and they’ll go through this water cleansing process. This water cleansing process could be one about abundance and finances and one could be about relationships and falling in love or about having a baby. It’s amazing!

PVM: Is there anything that you would like to share? Any final thoughts on anything about you or anything you’ve experienced that you want to share?

I just feel like it’s a magical time to be alive, to be honest. I love living and I think that we miss that. We get worked up into things and places and ideas that we’re not experienced in and we forget the art of living. I’m really loving the idea of being alive. I think it’s a really cool thing. I get to shop everyday and cook or not cook regardless. I get to begin again and I think that’s one thing about me that I really honor.